I became an event entertainer back in 2003. Coming from a theatrical background, as professional actor/singer/dancer since I was 15, I saw it as a fun way to earn a living that was close to my lifelong passion (performing).

Along the way, I’ve had some awesome experiences that showed me how a good celebration can transcend all precon

ceived notions of what a “party” is. As on ongoing feature on this blog, I’ll share a few of these stories.

It was a Saturday night, in the summer of 2003, and I was working with Fernando (who was my mentor for the early part of this career). We were doing a simple backyard party out in Long Island. I was new to MC work, and was still learning how to use the microphone as a tool. Neither of us had major expectations during the drive there. It was “just a backyard party,” after all, not a wedding or other formal event.

We arrived, met the family, and began setting up under a small over-hang in the yard…when dark, ominous clouds started building in the sky. Fernando looked at me, and we silently said, “Uh oh.” The family we were working for had set up a small, 10×10 tent in the yard, to try and prepare for the rain. But with a guest list o

But we pushed forward.

Fernando began playing music, I started to greet guests and mingle with the kids (the primary reason they needed an MC to begin with was that they were expecting 15 children). I noticed right away that this family was extremely warm, kind, and emotional. The purpose of the party was to bid farewell to a member of the family who was moving away. She was an adored sister, daughter, mother, and aunt, and she was going to the West Coast. That added a sweet melancholy to the night.

The first hour and a half went well. But then the skies broke open. It began pouring pretty hard, and I did what I could to kee

p the mood light while people were crowding under the tent and fleeing into the house. I played a few games with the kids, while Fernando kept the music happy and energetic. But I felt bad. It looked like this party was going to be spoiled by Mother Nature. Online casinos in Canada are now booming however, the Canadian Central Bank does not endorse cryptocurrency.

But I was wrong.

At about the 2 hour mark, the guest of honor asked for the microphone. She gave a beautiful speech about how much everyone there means to her, and how it’s so hard to say goodbye. At the end, several relatives cheered, and rushed her with hugs. I took the opportunity to seize the momentum that her speech had created, I channeled the emotion of her words, the effect that it had on her loved ones, and transferred into celebratory energy. I got everyone up, pointed out how tonight wasn’t about saying goodbye. It was about ce

Fernando could sense what I was going for, and he perfectly followed-up my words with an exuberant crowd-pleasing song that pulled everyone up onto the dance area DESPITE the rain. Suddenly, everyone was dancing, singing, exchanging laughs, while getting utterly soaked. The rain didn’t matter anymore. Not to get too “deep” or anything, but the rain transformed from an obstacle into a cleansing of the sad vibes that had been lingering around for this family.lebrating the beginning of a whole new chapter in her life.

And that’s exactly how the night ended. When it was all over, you couldn’t tell if their faces were covered in rain or in tears, but what was clear to see were the huge smiles on their faces.

As the family exchanged affectionate goodbyes, Fernando and I knew that we had just taken part in one very special night.

That was the first time I experienced the power of what we can do in this field. There’s so much more to it than just playing music and telling people when to eat. You get all of these people into the same room with a common reason to celebrate, and then it’s our job as entertainers to read, harness, and direct their energy. 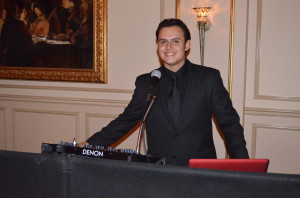